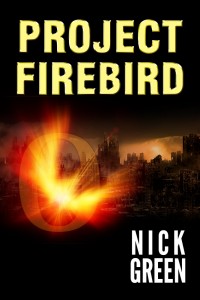 How do you save the world when it’s already too late?

Don’t ask Leo Lloyd-Jones. Ask him how to steal a car, or why he got excluded from every school in Salford, but don’t come to him for help. This whole thing must be a daft mistake – and if anyone finds out, he’s done for.

Earth is on a deadly collision course that nothing can prevent. The only real hope is Project Firebird, deep inside a blast-proof bunker that shelters the brightest and bravest young people. Leo has got mixed up with the likes of Rhys Carnarvon, the celebrated teenage polar explorer, and other child prodigies chosen to keep the flame of civilisation.

Among them is the streetwise Paige Harris, a girl Leo likes a lot (but not in that way). Paige is desperate to rescue her little sister from London before the catastrophe strikes. But no-one is crazy enough to try that. Almost no-one.

Leo is about to find out why he’s here.

1. Tell us about your latest book.

No. Ha, only joking. Well, let’s see… I think PROJECT FIREBIRD is one of those books

that asks you, ‘How would you react in this situation?’ It starts, more or less, with a bunch of

kids on a special adventure holiday, which is their reward for doing Exceptional Things. So

for instance you have outstanding athletes, some child geniuses, some kids who’ve show

outstanding courage or initiative, and so on. Together they make a pretty formidable crowd.

One of them, however, is the odd one out. He’s the protagonist – he’s called Leo Lloyd-Jones,

and he’s basically a rogue who steals cars and joyrides them, among other things. He’s here

because he daringly rescued a couple from being beaten up by a gang – but what he knows,

and the organiser’s don’t, is that he didn’t mean to, it was an accident. So he’s just a fraud,

along for the ride.

And then all these kids get a bit of a surprise. They are told that a comet is on a collision

course with the Earth, that civilisation is pretty much doomed, and they have been selected as

an elite team to help rebuild society in the wake of the disaster. Suddenly, Leo’s prize doesn’t

2. Where did the idea for the book come from?

Having this idea was a sl-o-o-o-oow process; it took about a year to take shape. One thing

does stick in my memory. I was reflecting on the attitudes of a lot of teenagers, the way older

folk generally label them as arrogant, cocky know-it-alls who won’t be told anything, and

think all adults are idiots. And I wondered if, in some circumstances, that irritating manner

(because let’s face it, it can be really irritating sometimes, can’t it?) – whether that manner

might actually be an asset. You know, maybe if you faced a really dire situation, it might

help to be that kind of supremely confident, brash, fearless person who can rush into danger

because they simply don’t know any better? The character of Leo began to come to me then:

this infuriating kid who nonetheless has the potential to be the saviour of humanity, because

he won’t listen to anyone telling him that he can’t.

So Project Firebird is a celebration of teenage arrogance! I’m sure I never meant it to turn out

3. Who and what inspire you to write?

My single greatest inspiration is (are? Damn you, English grammar) are the people on my

train who play Candy Crush Saga every morning. A few years ago it used to be Sudoku,

Why do I find this such an inspiration to write? Because I look at them and see them dripping

their lives away in this pointless, fruitless (no pun intended, Fruit Ninja) activity. I mean God,

it gives me chills. Would you want that on your gravestone? ‘Spent approx. 7 years of his life

staring at a phone screen’. So I don’t play those games. I think of ideas, and I write them in

my notebook. Even if they don’t end up as published stories, I think it’s still marginally more

worthwhile than playing some bleeping game.

4. Each author has his or her own inspiring journey. How did you begin writing?

I’m not really comfortable with the whole ‘inspiring’ talk thing. Writing’s just something you do,

or don’t do. It’s not some holy calling to be spoken of in hushed tones. My little brother plays

guitar and drums in a band (not at the same time, I don’t think) but no-one asks him about

his inspiring journey, they generally just yell at him ED, TURN THAT ******* RACKET DOWN,

PEOPLE ARE TRYING TO SLEEP. Unless that’s just me. But anyway – off-topic.

I do remember starting my first book. It’s not a book anyone else will ever read; I would burn

it, but even the match flame refuses to catch upon the paper, it’s that bad. Still, the moment

sticks in my mind. I’m sitting on my bed in my basement room beneath a guest house in

Exmouth (a minor British seaside resort), where I’m working in the summer break as a kitchen

walked into town and bought a blue notebook. Now I’ve taken out the drawer from the chest

in my room, tipped out the few clothes I have with me, and turned the drawer upside-down

to use as a writing desk, and I’ve started writing in pencil the first lines of what will become

It’s a nice memory, as so many unpleasant experiences end up being. Even though the

finished book was so awful, it was an important first step. I still have the blue notebook.

5. What has been the most pleasant surprise about writing? How about an

from a school class I’d visited to give a talk. Some of their ideas, I wished I’d had myself. The

the rest of the trilogy, forcing me to switch publishers and putting my career back about two

years. Publishers never think of the impact their casual decisions will have on people. It’s a bit

of a ruthless business.

6. Do you have any writing rituals?

I always write in the same way, separate files for each chapter, with notes in 10pt Arial font

and actual text above the notes, in 12pt Times New Roman. This helps me see my notes and

text at the same time, without ever getting them mixed up. I’m sure there are fancy writing

packages that can do far better than that, but that’s enough for me.

7. Do you write your books in order?

Do you mean, chapter 2 after chapter 1 and so on? Yes. I’ll often plan certain scenes way

in advance, but I’ll never cheat and write them first. Things could change in so many ways

before I get there. And it’s nice to have something to look forward to.

8. What is on your writing playlist for this book?

Like a soundtrack? There is a song by the band Take That, called ‘The Garden’, which for

me encapsulated the mood of the book, if not the whole trilogy. This is really weird for me,

because Take That are a boy band and thus practically against my religion, as a devotee of

prog rock and more ‘worthy’ stuff, as some might call it. I was stunned, if not mortified, when

Take That broke the laws of physics and released a song as brilliant as ‘The Garden’. Now

I’m forced to admit that they were a big inspiration for my most ambitious story. I still can’t

10. What advice would you give writers who aspire to be published?

Show me one who doesn’t! I’d just say, don’t be tempted too quickly to self-publish on

Amazon or similar. Still work on that manuscript again and again to make it as good as you

can. Don’t get into a situation in ten years’ time when you regret publishing a half-finished

work that you now think is terrible. The one good thing about the traditional route is that it

forces you, brutally, to improve.

11. Are you working on anything new right now?

Yes, but I’m not going to talk about it! Too soon.

12. Who is your favorite character in your current book?

Apart from Leo, the protagonist (I think your protagonist has to be your favourite, or else

you’re in trouble) I have a fondness for Skye, who is the little sister of Leo’s friend Paige.

In the first book she doesn’t do much, being only six years old. But she grows and matures

throughout the trilogy, and by the third book has become much more of a major player. It was

enjoyable to find her coming to the fore and taking an active role – literally, finding out who

she really is. Rhys Carnarvon is another one I like; he’s probably the most complex person in

13. What is your favorite book of all time?

It’s funny but I don’t think I really have one. If a book is really brilliant, then the book I’m

reading now always fills that slot. Then it’s time to search for another book to take its place.

Reading is a constant journey, don’t you think? It would be terrible to think you’ve read the

best book you’ll ever read. You must always be looking for another one.

14. Tell us in one sentence why we should read your book.

It’s just possible that you may never take anything for granted ever again.

Thanks for inviting me to chat! 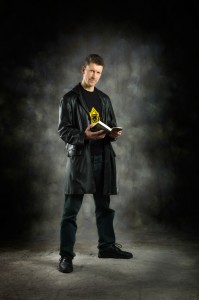 Nick Green lives in the UK. He is the author of seven fiction books to date, including the middle-grade CAT KIN trilogy published by Strident. His other books include THE STORM BOTTLE, a fantasy adventure about the dolphins of Bermuda, and most recently the FIREBIRD trilogy, a YA science fiction epic.