A depressed dragon, impudent kitten, and frightened young woman make an unlikely trio to save the dragon’s swamp and lead humans to wholeness. They need the help of the country’s leader, but he ignores animals, fears the dragon, and wants the young woman to be the mother of the heir he so desperately needs.

Only a crisis that threatens his country can persuade him to lose his mind, find his heart, and save his people.

In a world where water and earth teem with life, Serafay is an anomaly. The result of genetic experiments on her mother’s water-borne line Serafay will have to face the very people responsible to discover who she really is. But is she the only one?

All the Fun of YA written for Adults

Two Moons of Sera is a Fantasy/Romance and will be released in a serial format. The first volume is just shy of 20,000 words and will be priced at $0.99. Anyone who purchases it will receive all future volumes for free. However if you wait to get it until later, the price will go up with each addition

Inspired by Slavic mythology, Damien’s Oracle is the entree into the ongoing battle between good and evil over the fate of humanity. The White God, Damian, and his Guardians protect the world from the Black God and his monsters while rescuing Naturals – humans with extraordinary paranormal gifts – from the Black God, who would kill or convert them.

Caught in the middle is cool-headed Sofia, a Natural whose gift will tip the scales in the war. Sofia begins her transformation from human into oracle, the first in thousands of years. Damian rescues her from the Black God in time to complete a ceremony that will bind her to him for eternity. Sofia struggles with her new world and her role as an oracle and Damian’s mate while haunted by a mysterious man from Damian’s past who’s supposed to be dead. Unbeknownst to her, her link to the dead man may be all that saves Damian, his Guardians, and the fate of humanity.

While he wants nothing more than for the petite beauty to take her place at his side like the oracles of legend did his White God forefathers, Damian can’t quite rationalize having to win her over instead of command her. Further complicating his life is the sobering realization that there are spies in his organization who are helping the Black God take out his Guardians. Damian must help Sofia reach her potential fast, especially when a threat from his past returns.

Nine years ago, Molly Tanner witnessed a young girl’s abduction in the busy city of Philadelphia, shifting her occasional clairvoyance into overdrive. Two days later, the girl’s body was found, and Molly’s life fell apart. Consumed by guilt for not acting upon her visions, and on the brink of losing her family, Molly escaped the torturous reminders in the city, fleeing to the safety of the close-knit rural community of Boyds, Maryland.

Molly’s life is back on track, her son has begun college, and she and her husband have finally rekindled their relationship. Their fresh start is shattered when a seven-year-old girl disappears from a local park near Molly’s home. Unable to turn her back on another child and troubled by memories of the past, Molly sets out to find her, jeopardizing the marriage she’d fought so hard to hold together. While unearthing clues and struggling to decipher her visions, Molly discovers another side of Boyds, where the residents–and the land itself–hold potentially lethal secrets, and exposes another side of her husband, one that threatens to tear them apart. 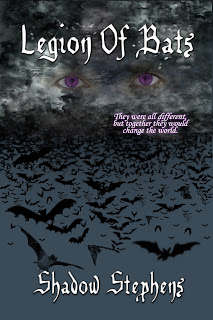 Legion of Bats—They were all different, but together they changed the world