Wild Rice Soup is one of my favorite soups.  Before I had my son and I was working, my friend Beth and I used to frequent a place called Salad Brothers.  I am sure they had salads, but they were pretty much known in downtown Rochester, MN for their soup.  They had the best Creamy Wild Rice Soup!  And the rolls….you went through the line, and at the end they had a tub of serve yourself rolls.  And if you serve yourself, you know you take a couple (or three)!  After I stopped working, I had to find a way to get the soup!  Taking a baby downtown Rochester, into the food court of a mall, and waiting inline with a bunch of business people didn’t seem like the way to go.  So I started trying out recipes at home.  This isn’t the same at all, but I love it.  I have been making it for years, and it is one of the few soups that my husband and I agree on! 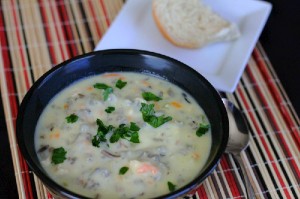 If you have any leftover turkey hanging out in your freezer, this is a great use for it.  I set aside about a 1 pound turkey from Thanksgiving just for this soup.  Once it was all said and done, my husband didn’t even know it was turkey in there.  He thought it was just the normal chicken version I make.

Make sure to stop by Dinners, Dishes, and Desserts for other great recipes like:
Red Velvet Cupcakes – This recipe makes 4 cupcakes!  Perfect when you don’t want a ton of treats around.
Chocolate Caramel Dipped Pretzels – These would be perfect with some red and green sprinkles for Christmas!
Cinnamon Roll Muffins – Quick and easy way to make cinnamon rolls.  No rising time, no kneading!
Five Spice Pork Lo Mein – This is one of my favorite stir fries.  Comes together in minutes!

In a large pan saute onion, carrot and celery in the butter until soft and tender, about 5 minutes.  Stir in flour until blended.  Slowly add broth.  Stir in rice, chicken, salt and pepper.  Bring to boil over medium heat.  Cook for a few minutes until it starts to thicken.  Stir in milk and cook for 3-5 minutes.   Garnish with parsley or chives.

Erin Sellin is the resident recipe contributor for Taking Time for Mommy – Online Magazine for Moms. You can also  find her on her own blog Dinners, Dishes, and Desserts and on facebook.