Nikki Hunt thought her night couldn’t get worse when her no-good, cheating ex ditched her at dinner, sticking her with the bill. Then she found his body stuffed in the trunk of her car and lost her two-hundred-dollar meal all over his three-thousand-dollar suit. Now not only is Nikki nearly broke, she’s a murder suspect.

Former cop turned PI, Dallas O’Connor knows what it’s like to be unjustly accused. But one look at the sexy-though skittish-suspect tells him she couldn’t hurt anyone. The lead detective, Dallas’s own brother, has the wrong woman and Dallas hopes a little late-night “undercover” work will help him prove it . . .

Christie Craig presents: 15 Things you’ll
learn from Don’t Mess With Texas that
might surprise you

1. Never, ever feed a dog broccoli.

2. You might be surprised how the weight of a dead body in the trunk of your car can go
unnoticed.

4. In the right situation, vomiting on someone can endear them to you.

5. When a good-looking detective steals your underwear, he may not be a pervert; he could
just be looking for blood splatter evidence.

6. Some men think hospital gowns are sexy, especially when a breeze comes by and a
detective already stole your underwear.

7. When your grandmother is getting more action than you are, something’s not right with
that picture.

8. Bed bugs are nasty little creatures but they can come in handy when trying to get
someone to fall back in love with you.

9. In the right set of circumstances, morphine can be an aphrodisiac.

10. The consumption of five cupcakes when your heart is hurting is not always a bad thing.

12. Nothing can bring all the unresolved issues to the surface in a romance more than
finding a naked woman in your boyfriend’s bedroom.

13. The journey to fall in love isn’t all sweetness and light; it can also have its darker
moments where you hurt like hell but it’s still a journey that makes life worth living.

14. Love can make you laugh so hard you pee in your pants, but it can also make you feel
like as though a pit bull just used your heart as a chew toy.

15. Things really are hotter in Texas. 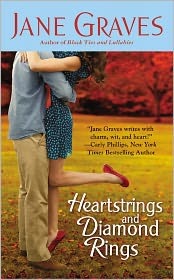 In a world full of frogs, Alison Carter is determined to find her prince. Maybe her dating past is more Titanic than Love Boat, but she’s seen enough happy marriages to know that true love is possible. No matter what, she won’t give up on happily-ever-after. If she can’t find Mr. Right, she’ll simply hire someone who can.

SHE JUST DOESN’T KNOW IT YET

When Brandon Scott inherits a successful matchmaking business, he thinks his prayers have been answered. Set up a few lonely ladies, collect the fee, how hard can it be? No one needs to know he’s not really a professional matchmaker-especially not his first client, the beautiful, spirited Alison. Soon he’s falling for her-and her dreams of kids and carpools. But Alison is getting close to figuring out his secret, and if she learns he’s deceived her too, she’ll walk right out the door, taking Brandon’s heart with her.

A note from Jane Graves:

Plano, Texas is a perfect setting for my series because it’s an exercise in contrast, just as my characters are. In West Plano, people live in McMansions, drive Lexus SUVs, drink a lot of Starbucks coffee, and play a lot of golf. West Plano is upper-class Texas living with a sprinkle of
glitter and a swimming pool in every backyard. East Plano used to be home only to blue collar folks who live in fifty-year-old tract homes with pickup trucks out front. Then the light rail came through and connected Plano to downtown Dallas, and the old downtown area was revitalized with trendy condos, restaurants, and bars. East Plano is middle-class Texas living with a touch
of urban cool.

Alison Carter from HEARTSTRINGS AND DIAMOND RINGS owns a condo in downtown Plano, while the hero of that book, Brandon Scott, lives in a Victorian house on the edge of downtown he inherited from his grandmother. Because of its diversity, Plano, Texas gives me a great opportunity to show who my characters are by where they choose to live.

Both are GREAT books and 3 lucky winners will win both!

Fill out the Form below for a chance to win!

I did receive both books but no other compensation was received.

Previous Post: « Secrets of a Happy Family, Part 4: Everyone’s Accepted
Next Post: IT’S NOT SO BAD – Tips for Traveling with Infants »