What do you get when you take eleven awesome paranormal authors, toss them into one box set, and turn up the heat?

This box set contains ELEVEN full-length novels from eleven authors. And right now. . .for a limited time. . .it’s only 99 cents.

Talk about a bang for your buck.

Meet author L.K. Rigel, whose book GIVE ME is part of this fabulous box set!

L.K. has been a newspaper reporter, a singing waitress, a public school teacher, and a court reporter. Her 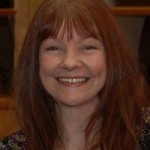 work has appeared in Literary Mama and Tattoo Highway. Her short story SLURP is included in DEADLY TREATS, Anne Frasier’s Halloween anthology published by Nodin Press, and her dystopian novella SPACE JUNQUE has been optioned for an independent feature film. 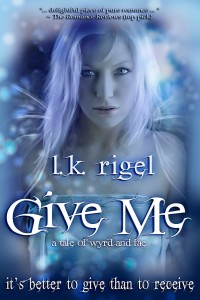 All she wanted was a vacation … but Dumnos offered a new life.

Lilith Evergreen has always lived in the California desert, but when she receives an antique ring as a gift, she dreams of a castle by the sea, a magnificent tree at cliff’s edge, and a mysterious woman who calls her to Dumnos, a land of mist and rain.

Cade Bausiney is the future Earl of Dumnos, but at present he just wants to bolster the local economy with a scheme to increase tourism. When he meets Lilith, a tourist from the other side of the world, his attraction to her is overwhelming ~ but are the feelings real or magically induced?

L.K. shared some interesting facts about her book:

People often wonder about the meaning of the odd title. In my books, I often explore the notion of self-sacrifice for a greater good—and Give Me is all about that. Plus, the phrase give me is a clue throughout the story to someone’s character—whether they use the phrase out of selfish or selfless motives: Give me your daughter because I want a wife. Give me your hand so I can help you. In the end, defeating the Big Bad comes down to someone being willing to give themselves (give me) to save another.

Another fact, the Wyrd and Fae series is set in an alternative Cornwall, which is in the southwest of England. Tintagos Castle is based on Tintagel, the legendary castle where King Arthur was conceived by Igraine—with the help of Uther Pendragon.

Meet all the authors

and enjoy fun tidbits from the books by visiting a