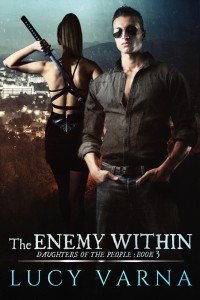 Title: The Enemy Within

After fourteen years, Indigo Dupree returns to Tellowee, Georgia, to face the past she left behind. She’s tried of running, tired of hiding, and wants nothing more than to help her mother through the final days of her pregnancy. What she doesn’t want is to become romantically entangled, not even to the sinfully handsome Bobby Upton, whose kiss sent her fleeing a decade and a half before.

Bobby is the son of the Blade and a ruthless warrior in his own right. At sixteen, the age of manhood among the People, he tried to claim the woman he loved and failed, and spent the next decade hacking his way through Uncle Sam’s enemies. Now a successful businessman, he’s given the task of tracking down the People’s enemies, including India Furia, the twin sister of his heart’s only love.

Duty demands that Indigo atone for the sins of her sister by helping to bring her in. India has other ideas, ones that draw Indigo and Bobby into a deadly game involving the Prophecy of Light, forcing Indigo to choose between her duty and her heart.

Lucy has been a reader for as long as she can remember. After devouring every suitable book in her house, she moved on to newspapers, encyclopedias, and telephone directories. In desperation for new reading material, she began crafting her own stories, and thus was a writer born.

In addition to reading, writing, and studying dead people, Lucy enjoys knitting, music, and long drives through the countryside during autumn. Most of all, she likes to spend time with her family, particularly her teen-aged son.

Previous Post: « Literary Addicts – #AmReading
Next Post: Do I Bother You At Night by Troy Aaron Ratliff Review and Giveaway »