The One Trilogy Book 2

Ali and Flynn were high school sweethearts. Eager to see the world and leave behind their small Georgia hometown, they’d planned for an exciting new life together after they finished school.

But on graduation day, only one of them hit the road.

Eight years down that road, an unexpected loss brings Flynn home again. He’s a big-shot photo journalist, and he’s made most of his plans reality. But he’s done it alone. Is it too late for his biggest dream to come true?

Ali’s spent those years working hard, raising a daughter and helping her brother keep their family farm alive. Thinking about Flynn and what might have been is a pain she tries to avoid. . .even when it’s impossible to forget.

Flynn’s return brings back feelings Ali thought were long dead and hopes she’d abandoned. Finding their way back to each other will change them forever, opening old wounds and stirring up memories.

Can first love be the one to last forever?

And don’t miss the first book in The One Trilogy

Review – I really liked the first book in the series The Last One and I met Ali who was Sam’s sister. she was one of my favorite characters and I really wanted to know more of her story so I couldn’t wait to read this.

Ali made a HUGE mistake in her past then made it even worse because she was scared. We all do dumb things so I could relate to Ali. She had told a lie for so long she thought there was no way to make it right.

She was so likeable and Flynn was too. He was out living that life that he thought should have been his and Ali’s but when his father passes away he had to come back and face what he had been missing for so many years.

Both Ali and Flynn were broken but not in an in your face kind of way. To the casual observer they were fine on the surface but they both needed each other. When you meet “The One” no matter if it is young in life or later on, no one else will do.

This has been my favorite contemporary romance in a long while. You don’t have to read the first book in the series but you should because it’s really good. 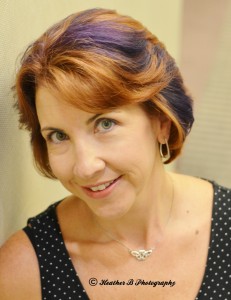 scenes and just enough conflict to make it interesting. Her books run from YA paranormal romance (THE KING SERIES), through NA paranormal and contemporary romance (THE SERENDIPITY DUET, PERFECT DISH DUO, THE ONE TRILOGY) to adult contemporary and paramystery romance (CRYSTAL COVE BOOKS and RECIPE FOR DEATH SERIES). She lives in central Florida with a husband, kids, sweet pup and too many cats. And yeah, she rocks purple hair.