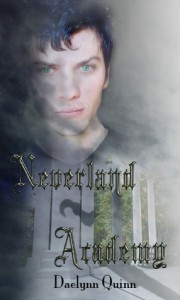 It was the worst day of Daphne’s life. Not only had her parents moved her from Atlanta to the middle of nowhere, but her boyfriend broke up with her in the middle of a crowded club and her parents grounded her for a month for sneaking out and stealing the BMW. All in one night! If she were back home in Atlanta it would be no problem. She could always find ways of getting around her punishments. But this was rural Georgia. And there was nowhere to go but woods and farmland. That is, until Finn showed up at her window.

Finn was the invincible mascot of Neverland Academy where Daphne’s brothers attended. For the five years since he’d been expelled from the all-boys boarding school, he lived in the old slave tunnels under the former antebellum plantation home. He and his band of outcast boys lived for pulling pranks on the school’s professors, and especially the headmaster, Byron Trappe, who had a personal vendetta against Finn.

Daphne grew to love life under the academy. But there was one problem. She was falling for Finn. Hard. She knew he didn’t want a relationship or anything that resembled growing up. But when the wall she built between them begins to crumble before her eyes, will she stay at the academy and face impending heartbreak? Or will she leave her heart behind and escape the dangers of criminal life, including a perilous encounter with the vengeful headmaster?

Daelynn Quinn was born and raised in southern Maryland where she spent her youth exploring and falling in love with nature in the woods behind her house. She graduated the University of Northern Colorado with a degree in dietetics, which she promptly abandoned to pursue writing. Daelynn’s writing is fast-paced and laced with current issues that concern her. Her first dystopian trilogy, Fall of Venus, focused on climate change and the role we as humans play in it. Her YA novel, Neverland Academy, delves into child abuse and negligence. Daelynn is excited to be commencing a new series, which will tear into the animal exploitation industries. While she is not reading or writing, Daelynn enjoys brainstorming while mowing her lawn, cooking healthy meals her kids refuse to eat, and watching old episodes of Mr. Bean with her three boys.

“What’s going on? What happened?” Daphne asked, kneeling down in front of him. He raised

his vivid eyes to look at her. She was right—his mischief was gone. There was no trace of the

boy who wanted nothing of grown up life. This boy was well beyond his physical years. The

severity in his eyes cut through her like a razor slicing through a tomato.

“He got her,” Finn responded. “Trappe got Lily.”

Finn fell back, slamming his back into the wall behind him. “I don’t know. I wasn’t there. But

I could hear them talking and Lily shouted a warning at me, telling me to run.”

“So, she’s in pretty big trouble then?”

An acerbic grunt escaped Finn’s lips. “You could say that. The question is, how deep is she

“Surely it can’t be that bad,” Daphne assured, not quite believing herself. “I mean, her mom

lives and works here. The punishment would have to be reasonable. Maybe he’ll just let her mom

take care of it.”

Finn shook his head. “If it were just about the party, you’d probably be right. But it’s more

than that. She got caught because of me. For helping me. To Trappe, that’s like aiding and

Daphne didn’t know what to say. She reached out for his hand and he allowed her to hold it,

gently stroking the back of it with her thumb.

Finn shrugged. “There’s not much we can do tonight. Trappe would have informed the others

by now. They’ll be on high alert. We’ll have to wait until tomorrow to do anything.”

Finn stretched out across the pad on his side, sinking his head into Daphne’s pillow, while she

forehead to hers. His arms wrapped around her waist snuggly, as a child holding a teddy bear. “If

I don’t I’ll be up all night thinking about what to do. I’m too on edge right now. You bring me

that if something goes wrong you’ll be here to take care of me.”

“I guess. To be honest I wouldn’t know.” Finn brought his lips to hers, soft and delicate.

When he pulled away his eyes remained closed. “Get some sleep Daffy. I have a feeling

tomorrow will be a big day.”

“What do you mean?” Daphne whispered, allowing her own eyes to fall shut.

“The plan. Tomorrow we move forward.”