From Amy at My World Simplified

I participated in a campaign on behalf of Influence Central for Cirque du Soleil. I received tickets to Amaluna to facilitate my post as well as a promotional item to thank me for participating.

My family was pleased to be able to attend the Amaluna Show by Cirque Du Soleil in Miami Florida. The show changes every year so you better hurry if you want to see Amaluna. (Get tickets HERE) Cirque Du Soleil in my eyes is a combination of the circus, broadway, and a music concert all rolled into on spectacular show! I was surprised how many different shows there are from Cirque Du Soleil. I think the Orlando location is in my families future~

The week before the show was almost torture for my children. They were so excited and kept going to the website looking at the information about the show. On the website they were able to find enough information to keep them excited but not enough to giveaway the show! 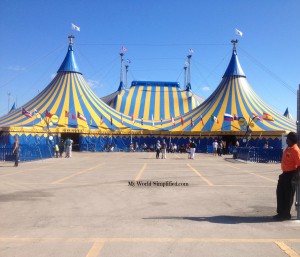 As we excited the turnpike we were able to see the big top right away. There were many squeals of delight at the sight of the blue and yellow strips! We arrived a little over an hour before the start of the show. We were able to peek inside the tent, take pictures in front of a trailer with great pictures on the side and even purchase drinks and ice creams! 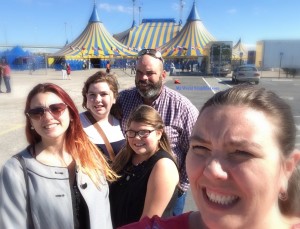 About thirty minutes before the show they opened the gates and we had to show our tickets to enter. Upon entering you are swept into a magical place. It was really warm in this area but Miami anytime of year is hot! There were stands to purchase souvenirs, snacks and even a nice bar. Warning alcohol drinks are expensive. We purchased each of us a really cool water bottle for a great price and there were 5 gallon dispensers to fill them, BONUS free refills!!! The items to purchase were priced as expected, every budget can go home with something neat to save. 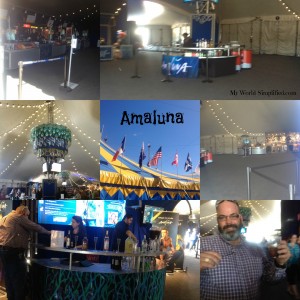 There were some lounge area’s to sit in and restrooms that were similar to port a potty’s but better. They even had hand washing stations, another bonus for us parents! We went to our gate a few minutes later we entered the big top. There were ushers to assist in finding seats but we easily found ours without help. The seating was pretty nice. Every seat had a good view, even the cheapest tickets. The ushers also helped little ones with free booster seats!

The big top stage and ceiling were decorated so magically. You truly felt as though you entered the island of Amaluna! As the show got closer to starting some of the performers pranced around the walkway, interacting with a few people. Soon our favorite character appeared on the stage Cali. He was such a character and had the audience cracking up long before the show started. 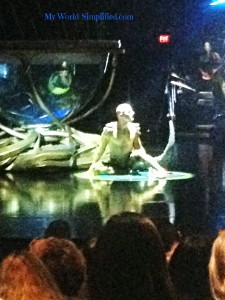 It was really neat how the show went from them walking around to the show starting almost seamlessly. We were asked not to take pictures or video’s and I honored the request (although the photo of Cali above, Hey I didn’t know yet that I broke a rule) so unfortunately I don’t have any great pictures to share. Don’t leave your seat either because there is an intermission with the perfect amount of time to use the restroom and get a snack.

The show itself was marvelous! I wouldn’t really recommend it for kids much under 10 years old though. My 10 year old had no clue what the story line was. She did love all the acts but I feel she missed the true magic of the show. She was still mesmerized and chatted for days afterward. The costumes and makeup was wonderful. The music really surprised me! I did not expect it to be live music! The band (drums, singer, guitars, cello, and many more) were all dressed in the theme and were a part of the show not just in one little area playing separate. It was AWESOME!!!

I would Highly recommend EVERYONE over the age of 10 years old to see this show! It’s a great way to introduce the fine arts to children in a new way~ I now want to see another show. Thankfully we live close to Orlando and Cirque Du Soleil has a permanent location in Downtown Disney!