The last thing he wanted was to fall for a witch…

Veterinarian Kat Ramsey hasn’t a clue that she’s a witch. Sure, she can read minds, and there’s the whole “dimension-hopping” issue that she can’t quite control, but Kat is determined to keep things normal. That is, until she accidentally hops into the Otherworld, and runs smack into Matthew Ryan?the seriously hot one-night stand from years ago who shoved her out of his dorm. Naked.

And there’s the tiny matter of the curse she gave him.

May you never find satisfaction with another woman. Billionaire and former druid Matthew Ryan hasn’t forgotten the curse, or the witch who gave it to him. Kat’s unexpected return means the curse will finally be broken. Unfortunately, his libido has other ideas?like how to get her back into his bed one last time. But far more worrying is his suspicion that Kat is the seventh Pleiades witch. Because while he’s turned his back on his druidic ways, he’s still bound to protect the woman who made his life hell… 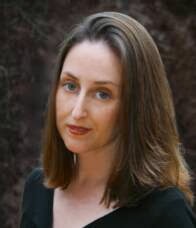 Zoe Forward writes action-adventure paranormal romances. She lives in North Carolina with her family and an assortment of pets. A graduate of Duke University, she majored in biological anthropology, but always had a special love of archaeology, especially anything Egyptian. Although a deep part of her wishes she had pursued a career that would have her at a dig site in a hot, sandy country, she’s a small animal veterinarian, caring for everything from chinchillas to dogs…and even one hermit crab in there. When she’s not being a vet, a mom, or sneaking out to a movie with her husband, she’s at her laptop writing.